I did something the other day that was done kind of out of an angry place, but has really made me happy in the long run. A week ago I turned off the auto-email check on my phone, and I don't miss it at all. Now I check in on my email when I feel like it, instead of being alerted at random moments of my day to emails that I largely do not care about.

I won't ever take the email app off of my phone, because there are days that I don't sit down at a computer and some of these emails do need a response. I don't think that I'll ever go back to pushed email notifications though. Even just the way that it's worded bugs me now. I don't want the phone to push my email to me, it can fetch it for me when I am ready to see it.

That's pretty much the approach I have with all the various apps and things now. I don't even like it to give me little number badges over an icon to pester me into looking at it. If I feel like checking on it I will, until then it should just sit there and be quiet.

The exception I make is for actual phone calls. It is a phone after all. So my phone is allowed to let me know when people call, but that is all.
Posted by Tara at 8:31 AM No comments:

Email ThisBlogThis!Share to TwitterShare to FacebookShare to Pinterest
Labels: hmmm

Got around to washing the big grey amoeba that hangs out on the couch this morning and pinned it out to dry on the floor. As much as it's still a crazy blob of weirdness it would look so much worse if I skipped this step. Pardon the lousy photo, but rainy grey weather does not help indoor photos of grey blobs on tan floors. 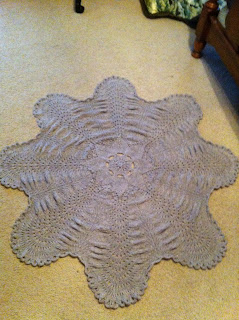 Remember when I said that I regretted not telling you about the sale on WoW a while back? Well, now the sale is back and directly from Blizzard. No having to track down the various expansions through other points of sale.

This was just posted about the sale a few minutes ago. The sale is only until August 27th, so if you are interested now is the time to pounce! Even if they end up releasing a bundled version that includes all of the previous expansions up to Cataclysm I don't think the price point will come down below $20 for a long time. Since it isn't one big bundle you can just pick up the pieces of the game you need, if you have an older account that didn't upgrade to Cataclysm yet.

Here is a direct link to the Blizzard Store to purchase the games.

You have the choice of having the physical game delivered to you, or opting for a strictly digital version. The digital version of course means no waiting or paying for shipping.
Posted by Tara at 2:43 PM No comments:

Email ThisBlogThis!Share to TwitterShare to FacebookShare to Pinterest
Labels: games

I don't talk much about playing World of Warcraft. I think I'm still a little embarrassed by it, which is kind of ridiculous. I've been playing off and on for over seven years. It's a little late to feel shy about this game that I like to play. Also? I'm 35 damn years old, so really I should get a hold of myself.

The reason that this has come up is that there is a new expansion coming, Mists of Pandaria, and I think it looks really great. I've played around on the beta server a little bit on a lower level character, and that starting zone is beautiful. I haven't taken my higher level characters to the new zones because I'm waiting to explore them for the first time once it goes into the actual game. Here is a zone preview for Pandaria that I saw linked to today. It's so pretty. When the pre-expansion patch (5.04) comes on Aug 28th they are making  a pretty nice change to the game. It used to be that if you wanted to try out any of the new races then you had to have the expansion pack that brought them into being. If you wanted to be a space goat draenei or blood elf then you needed to buy Burning Crusade (which now comes in the Battle Chest box), if you wanted to try out goblins or worgen then you had to buy Cataclysm. Looking forward to playing pandaren then you would need to be prepared to purchase Mists of Pandaria when it comes out on Sept 25th. Now any account at any level of activation will be eligible play any of the active races. You should be able to create a free trial account and as of Aug 28th be able to see if any of those added races grab your interest. You won't be able to try pandaren yet, because they aren't in the game, but according to this post by Blizzard you will be able to once the expansion is live September 25th.

I think that's really cool. Not that it matters for me, but I could see how it would suck to be someone new coming to the game and you really want to try out one of the races that weren't packed in the original game but you have to financially commit first. Now I know I should have mentioned a couple of weeks ago when you get current up with the game (minus the coming expansion) for only $20. I'm really sorry that I didn't, because that was a pretty awesome deal. (See above re: shyness over my gaming and there you have why it didn't come up.) You can still look around and find some decent deals, but nothing that approaches that level. However you can still dip your toes into World of Warcraft for free. You can only level to 20, out of the current max of 85, but it gives you a chance to experience the game with zero monetary commitment. It will let you see if you like the game at all. It will let you know if your machine can handle the graphics.

I play on both a PC box upstairs as well as my MacBook Air. I use slightly lower graphical settings on the laptop but it still looks pretty. My biggest hinderance to playing on the laptop is lack of ergonomics. I usually end up with a hurt wrist or back if I try to play for any length of time on the laptop. If I took it to my desk I'd have zero problems with it. I played on it exclusively when my desktop machine was out of commission for a while.

So maybe I'm a big ol' dork, but I really like this game, and if you were ever considering it then I'd say go for it. I know it's annoying to pay for software and then also pay a monthly fee to continue playing the game, but for me it's been worth it. There are times when an expansion has been around for a while that I've run out of things to do, or things that I care to do at any rate, and then I just cancel my subscription for a while. All the characters and items are still there when I come back to it, so it's really not a big deal.

If you do want to begin playing with a paid account here are a few bits of information that you might find useful.


So now you know my dirty little secret. I play World of Warcraft. (Yes I know it wasn't a well kept secret.) It's funny how I would never look down on anyone else for playing the game, but I still feel self conscious about my own playing. I'll work on that.
Posted by Tara at 6:26 PM No comments:

Email ThisBlogThis!Share to TwitterShare to FacebookShare to Pinterest
Labels: games

I'm a little behind on photo editing, and even further behind on posting to Flickr. Digging through photos taken over a year ago can bring some surprises. With it comes this Potato Abomination courtesy of Max. 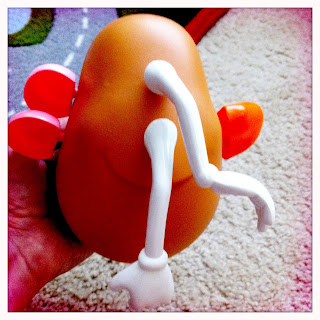 P.S. - I know I hardly ever post anymore, but that's why they invented RSS feeds. Just forget about this blog until BAM surprise potato freaks.
Posted by Tara at 2:39 PM No comments:

Email ThisBlogThis!Share to TwitterShare to FacebookShare to Pinterest
Labels: kiddo

I figured I better take the chance to get caught up on my knitting here at the blog, since we are once again between rounds. The last time I mentioned Sock Madness I believe that I had just finished Round 1. Well... we've done a bit more since then. Round 2 has come and gone, and we even did an optional round over the Easter/Passover holiday.

Round 2 was a devil of a sock, Frick n Frack by Jenny Lee. The right and left socks are as close to opposite of each other as she could manage. One is knit toe up and the other from the cuff down. The cables cross differently on the right and left sock and on top of all that difficulty they both feature an afterthought heel. The pattern had you knit a tube then open up a slit to knit in a heel. It was pretty cool and I wish I'd taken pictures of the process. Both times it made me laugh like a monster mouth opening in the sock. The optional round was da' Treehouse by Adrienne Fong & Debi Woods is kind of an inside joke for the group. There is a thread in the forum called the Treehouse where knitters can hang out between rounds, or when they've been dropped from the competition but still want to chat. The stitches form a faux zipper (and zipper pull) and there is a decorative button flap at the top of the cuff. It was a fun knit even if the new stitches caused some of us a bit of confusion. That gets us caught up on the Sock Madness front. Sometime in the next week they should drop the specs for the true Round 3.

Since I seem to be in sock knitting mode I actually joined up with yet another sock knitting group on Ravelry, Sock Knitters Anonymous (or SKA). Each month there is a set of challenge guide lines and you knit socks that fit into one of the categories. There is a random drawing for prizes among people who finish a pair of socks in the timeframe allowed and each pair you finish gets you another entry. I'm currently working on the second sock of my Achilles Heal for SKA's April challenge (literary theme).

I've also done some non-sock knitting this year, but this post is already getting a bit lengthy so I'll save that for another time.
Posted by Tara at 2:19 PM No comments:

One of Max's favorite things in the whole world is Birthday Cake. He has told me "Happy Birthday" out of the blue on occasion, and then asked for birthday cake. He's a funny guy.

If you want a really great birthday cake, might I suggest:
Make a Guinness chocolate cake
Make some buttercream icing
Make some cherry topping

Frost the cake with the icing and add some cherries upon serving. It is a tasty treat.
Posted by Tara at 9:36 PM No comments:

This is a Flickr badge showing items in a set called Max. Make your own badge here.

This is a Flickr badge showing public items from thingwhatsqueeks tagged with knit. Make your own badge here.